Discover how Jesus can make your home glorious with my FREE 20 Day Devotional! Yes please!

Well, were almost halfway through our summer school break.  My kids won’t begin their homeschool year until the beginning of September.  Interestingly, in other parts of the country, some families are starting school next week.  More power to them!  I can’t help but feel that summer is going way too fast.  Is it just me?

How was your weekend?

I hope you had an amazing time worshiping the King of Kings this weekend.  Church is always a highlight for us.  I love to walk around after church capturing images of all the beautiful families I worship with and the lovely teen girls while they fellowship after service. Sometimes I wonder if I look like a stalker walking around taking random pictures of people. I hope they forgive me.  I love capturing images of Life in Christ.  Here’s some of the little tots in our church playing duck-duck-goose with Alexis…

My Little House on the Freeway was certainly bustling with activity this past weekend.  The cement on the side of our home was broken up and in disrepair for a really LONG time and my husband decided to take on the project instead of paying contractors to do it.  Yay Honey! You da man!

It was backbreaking work, but I knew he had it in him.  His partners in repaving were his brother and our oldest son.  I was very thankful that our son was getting this kind of training and experience.  I want him to have the confidence of knowing that he can take on projects and not have to pay someone else to do them.  This will come in handy in the future when he has his own family.

Our kids always have their friends around, but I was so impressed when one my son’s neighborhood friends walked right up to the project in progress and jumped in to help without being asked! He helped make and mix the cement – not easy – and never complained or stopped working for hours.  That showed a good work ethic on his part.

Even Angel joined in to give a hand.  (A very tiny hand, but still.)

While the guys were repaving, the girls were inside cooking.  Again, more friends.  One of Angel’s “Besties” from middle school slept over and helped her cook dinner.

Life was looking pretty good for me – with the guys outside fixing up the house and the girls inside cooking away!  I sort of just sat back and supervised the girls.  It’s great when your kids become old enough to take on your house hold tasks under the premise of child training…yeah, child training. :o)

The repaving job took longer than anyone expected and the guys were out there for what seemed like an eternity. Eventually, my husband had to grab a flood light so they could see.

Eventually, it was all hands on deck and everyone pitched in and helped in anyway that they could.  Even little Alexis lent a helping hand by holding up the light so that her Dad, big brother and the men could see better.  She was an eager-beaver at first; but after about a good 10 minutes the gig got tiresome, but she persevered, nonetheless.

Back to our day of worship

We ended our day dining out at Sammy’s on City Island.  If you live in the NY area, going to Sammy’s is a bucket list excursion.  They serve some of the best seafood around and the pictures of many famous people cover an entire wall to prove it.  The portions are ginormous, as is the food itself.  I felt like we were dwarfs when the food arrived – which was complete with the eyes still in the biggest lobster I’ve ever seen in my life.  It was an experience that grossed Alexis out (me too, sort of) and made her vow to become a vegetarian – I kid you not!

On one of our many trips to the restroom (that’s the life of a mom with little girls), I took this picture of Autumn in the mirror.  (No I’m not pregnant, I forgot to suck in my stomach.) 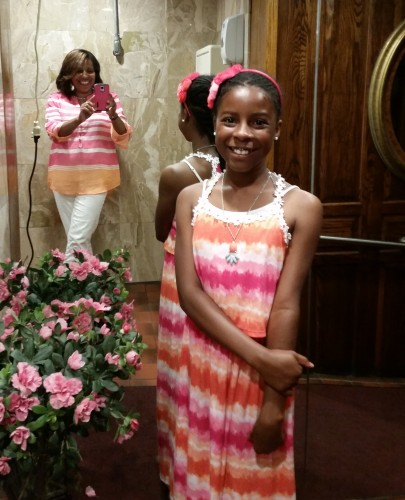 Taking pictures of the kids in the bathroom?  What’s this world coming to?!

It’s the little things that matter so much in life.  The cooking, the repaving, the random games of duck-duck-goose. The weird shots of little girls growing up entirely too fast in restaurant bathrooms.  *Doing* family is a blessing that the God grants us.  Let’s not take it for granted!

Here’s to a great faith and family filled week!

While We Wait: Anticipating the Christ Child and our forever child

This site uses Akismet to reduce spam. Learn how your comment data is processed.

Hey Boo, I'm Back! . That's the title of my latest

I'm never happier than when I'm gardening or doing

Happy Resurrection Day! We got dressed up for East

Incase you missed it, this happened.... . Praise t

Merry Christmas from my home to yours.