I stopped by the supermarket one evening and saw an all too familiar scene: a momma with a hot-red face shopping with her kiddo’s. 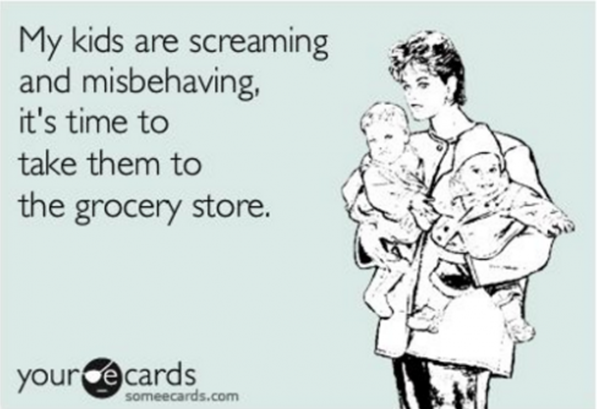 This momma was seriously trying to hold it together.  Her grade school kids were playing – age appropriately – yet still playing, if you get my drift.  They were doing what normal kids do when it’s fairly late on a school day and they are out shopping with mom during dinner time, still dressed in their school clothes, instead of at home eating dinner.

Stop and quiet down, or else!

She had to repeatedly tell them to “Stop!” and to “Quiet Down!”  The problem wasn’t simply that she had to speak to them more than once; it was the accumulation of an evening spent running errands with kids, when instead, she should have already been at home finishing up dinner and scrambling to have a “Calgon” moment.

By the time I caught up with her, both of us waiting to exit the grocery store, her face was flushed and swollen with frustration. She was beginning to reach her boiling point.

She looked over at her kids and wrung her shopping cart handle so tightly that I could hear it scream.  At this point I soooo wanted to crack a little joke; just something to lighten her mood.  I mean, I’ve been in her shoes.  What mom hasn’t?  I think we all understand her predicament because if we have kids – the kind that are sinners and not perfect little angels – we’ve all been That Mom at one time or another.

I thought to tell her: If you turn your head, people might think they’re not yours. 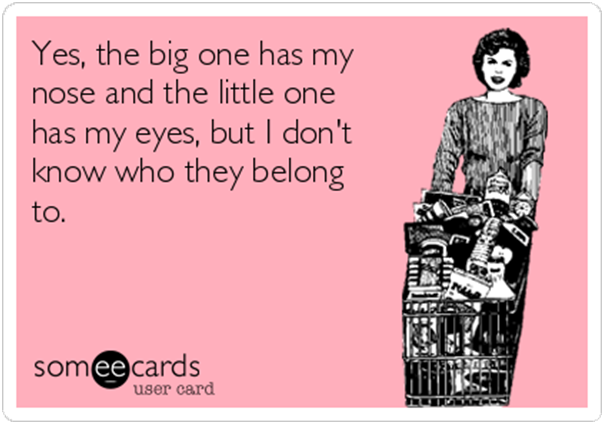 But then I decided against it, because I thought it might not end so well – for me!

But seriously, have you ever been that mom?

The one who hears her kid having a 10 alarm, code-red melt down standing ten feet away from her in a grocery isle?  Or the mom whose kid has licked the floor clean because their M&M fell on it?  Or your kids have single-handedly knocked over an entire display of cans (again!)?  And you find yourself inching away from them as strangers look on in disbelief?  And when people quickly catch your shame-filled and diverted eyes, you fake-smile and matter-of-factly say, “I don’t know who the mother is.”  And then, JUST FOR KICKS you add, “But I feel sorry for her, whoever she is.”

Then, as you keep inching away from your child you quickly run around the back-end of the isle and surprise them from the front end with one swift, sudden – and might I add, impressive – Jet Lee karate chop!  (Yeah, you’s one bad Mamma Jamma!)

Not even a teeny-weeny bit?

I really have done this before – the denial thing.  If the person that I’m denying my children to has a sense of humor, we both get a killer laugh, and by that point I really need it!  If they have NO sense of humor, I bow my head in shame, garb a bag of Double-Stuf Oreo’s from the shelf and begin eating away my embarrassment.

Double-Stuf Oreo’s does a world of good.  And when you binge-eat them due to embarrassment and unadulterated shame, no calories are involved – pinky-promise. 😉

(Psst: Doritos work nicely, too! Don’t ask me how I know this.)

I’m Back! And I’m Rambling About Mostly Nothing. It’s So Fun!