every so often the perfect ingredients come together – in a most sneaky and unpredictable way – to create a diabolical concoction of trouble in marriage. More violent than any force of nature – this is what I call THE PERFECT STORM. 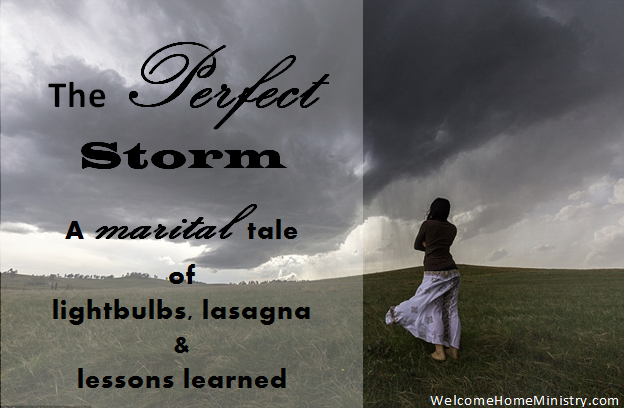 If it were an earthquake . . . it would measure an 8.0 on the Richter scale – there’d be no safe places in which to take refuge, no furniture to hide under . . . you’d just have to stand there – shaking in your boots – until the violent quaking was over.

If it were water . . . it would be a tsunami!  Crashing against you so violently, yet unexpectedly that you’d have no time to retreat, and you’d have to just stand there and bear the brunt of the waves, while your head bobs back and forth repeatedly as if it were being hit by Muhammad Ali (or George Foreman!).

This recently happened to me.  After sharing this post (just days ago!) where I talked about how after 21 years of marriage I was experiencing one of the most satisfying seasons EVER, I was completely blind-sided by A PERFECT STORM.

Heed my warning and learn from my tale – or else, this could be you and your husband. (Be afraid!)

It happened on a day when I was feverishly preparing to host six of my in-laws – some whom had never been to my home before.  (The pressure!)  Everyone in my family was pitching in and busily helping me with cooking, cleaning, setting the table, and the other things that MUST be done right up until the very moment guests ring your bell.

I am really good at multitasking, but I am not good under pressure.  I was a movin’ and a shakin’ and almost breaking a sweat while timing the entry and exit of the lasagna, stuffed shells, apple pie and garlic bread in and out of the oven.  (Just a wee-bit challenging.)  In between, I was giving oversight to the seating arrangements, the table display, and directing my little elves (my three girls) in cleaning and wiping and dusting every square inch of our home.  Things were going kinda swimmingly.

A strange cocktail of events unfolded  – the precursor to a perfect storm . . .

My husband walks in (after going MIA for up to 2 1/2 hours!) with the THREE grocery items I requested AND a bag of light bulbs!  LIGHT BULBS?  Turns out that he made a pit stop to the Home Depot on his way for groceries. Apparently, his zeal to save money on our electric bill consumed him and he just had to get the bulbs!

I could have let that slide – had he not began to replace EVERY light bulb in EVERY light fixture in our home (no bulb was safe!) just moments before our guests were to arrive.  DO I NEED TO TELL YOU WHAT HORRIFIC LIGHT SOME OF THOSE “LED” BULBS GIVE OFF?

Me: {Looking puzzled.} Honey, what are you doing?

Me: Mal, the bulbs are giving off white light!

Me: Jamal – take that bulb out PEASE!  It’s so ugly. Look at what it’s doing to the living room.

Hubby: {Enlisting the help of others to replace bulbs in other rooms.} 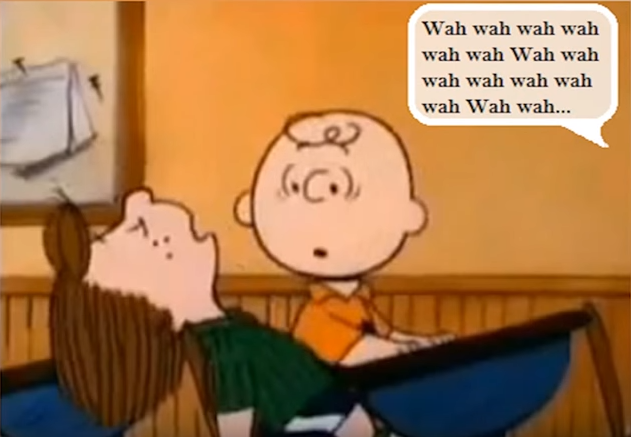 Hubby: {Tuning me out and wishing that teleporting was an actual thing.}

I’ll just stop there because you can get my drift.  It was a challenging discourse.  In short – hubby eventually cut me off and made a final decision in favor of the bulbs.  I inwardly fumed and blew steam out of my ears, but held back the brunt of my fury – which I unleashed in FULL the following day.

My fury was met with a full measure of his.  Neither one of us could believe the other was so stubborn and closed minded.  One bad word, harsh tone and angry facial expression led to another, until we both considered each other to be the most unreasonable person that could ever exist.  How could that have happened?

Take one well-intentioned, albeit slightly time-challenged husband, and one unsuspecting, house-obsessed and…ahem…controlling wife AND mix with 1) light bulb switching and 2) imminent arrival of guests and you’ve got one STRONG cocktail for a PERFECT MARITAL STORM.

Afterward, I was honestly in shock that I had allowed myself to say what I considered to be the truth in such a hurtful and reckless manner.  For some reason, I thought I had outgrown that . . . but there it was again – my sinful heart getting the better of me .  . .

and painfully pointing out his short comings.

I later learned that Hubby felt unappreciated for his effort in cutting costs and trying to be a good steward of his home.  In his mind, he took the effort to go out of his way and brave long lines on a Saturday at the Home Depot just to come home and be ridiculed.

I was in disbelief over the fact that all of the lighting in my home was beginning to resemble flood lighting just a mere hour before our guests arrived.  “What in the world was he thinking?” I wondered.  And he wanted me to be grateful for that? (Yeah, save the hater mail.  I already know I bombed big-time!)

There was just no way around that (for me).  The forces were strong!  It had the all the elements of a perfect storm: SHOCK, PANIC, DEADLINES, GUESTS and competing interests.

And even though I did learn a lesson (all after-the-fact!), I’m sure to make more missteps in the future – so grace!  But this post isn’t for me, it’s for YOU, so

if your husband tries – without warning – to swap out all of your light bulbs (making it resemble a disco-tech) right before you entertain guests . . . please, Please, PLEASE do not question his logic or resist his efforts!  Be sweet and smile .  (Shhh…you didn’t hear that from me.)  😉

Holla Back!  Have you ever experienced your own perfect marital storm?  I’d love to hear from you.  Let’s continue the conversation in the comments below or join the conversation on Facebook.

I shared this article at these amazing faith and family linkups.