“Wives, submit yourselves to your husbands, as if fitting in the Lord.”  Colossians 3:18 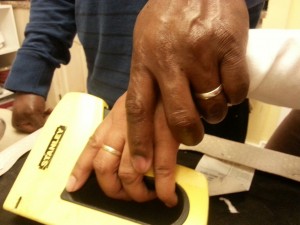 Yesterday was our appointed day to reupholster our kitchen chairs.  Oh Joy!  (Not really, but it had to be done.  I’m talking yuk like you wouldn’t believe.)

As my hubby took out the fabric and used one seat cushion to begin making a template for the other 5 chairs, I sat looking on, with an ever watchful eye, doubting his strategy.

It bothered me that he appeared to be measuring the fabric with little or no room for error.  “Why would he make a template using a faulty strategy?” I thought. I had invested time pounding the pavement, going from store to store shopping for this fabric and we had a comfortable amount for 6 chairs, but not for 7.  So, if he blows one pattern, I’d be pounding the pavement again. 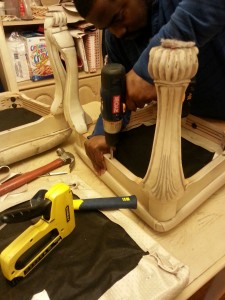 Well, I wasn’t about to let that happen, so I chimed in, “Honey, do you think you should give yourself a little more room for error when measuring the fabric?  It barely looks like it’s going to cover the sides.”

“Ahhhh…Tiff…I got this,” was his retort.

I needed him to substantiate his strategy. For goodness sakes, we only had one shot at this template.  So, I continued to press him sweetly question him.

“But if you make the wrong cut it will affect the other chairs.”  What about my time, my sacrifice? I thought. For goodness sakes, I host a ladies meeting on Friday!

“Tiff…let me do this please?”

“Hold on bud!” I thought to myself.  “This is not a personal endeavor.  It’s OUR kitchen chair project.  You don’t get to decide if the measurements are right all on your own – against my better judgment – and I have to deal with the fallout.  Allow me to participate in the process and don’t shut me out – especially when you’re wrong!”  (Wow, this sounds pretty bad on my part, but I promise you…I wasn’t as bad as I’m making myself sound.  I was thinking it, but I didn’t say it. If I keep saying that will you believe me?)

I’d like to point out that over the 20 years that we’ve been married I have learned a thing or two (albeit the hard way) about appealing to my husband.  So, I was careful to not raise my voice and to choose my words wisely.  I spoke in a fairly soft and inquisitive tone…not a harsh, in your face, my way or the highway tone.  (Not that I haven’t in the past, but I’m learning from the mistakes of the past.)

Does that sound reasonably fair to you?  Perhaps it does.  But if he would have said that, I probably would have mutated into the character of Storm from X-Men. I’m sure a quiet fire would have risen up in me and smoke would have come out of my ears and hot lava from my mouth.  “What?  Now I can’t even comment on how you cut fabric?!”  That’s usually the beginning of where I get myself into trouble.

Why is it so hard for me to accept a verbal shut-down?  To be told, “That’s enough” and accept it peacefully?  I know it’s my sin nature, my rebellion, and bad social and gender conditioning.  I didn’t always know that.  I subscribed to the “Don’t tell me what to do; you’re not my boss or my daddy!” philosophy.  (And that would have been with some neck rolling and possibly some foot stomping.)  But that attitude is venom to a marriage. It’s lethal to a love relationship.

My husband is the head of our marriage.  As such, he reserves the right to “shut-it-down” so-to-speak.  Thankfully, he cares greatly about our relationship and has learned to be careful in his handling of me.

“Husbands, love your wives and do not be harsh with them.” Colossians 3:19

But even when he does this carefully, I still struggle with having a biblical response.

Well…at least I am struggling for something better…

“Not that I have l already obtained all this, or have already arrived at my goal, but I press on to take hold of that for which Christ Jesus took hold of me.  Brothers and sisters, I do not consider myself yet to have taken hold of it. But one thing I do: Forgetting what is behind and straining toward what is ahead, I press on toward the goal to win the prize for which God has called me heavenward in Christ Jesus.”  (Philippians 3: 12-17)

Ladies, let’s keep striving for something better, together!