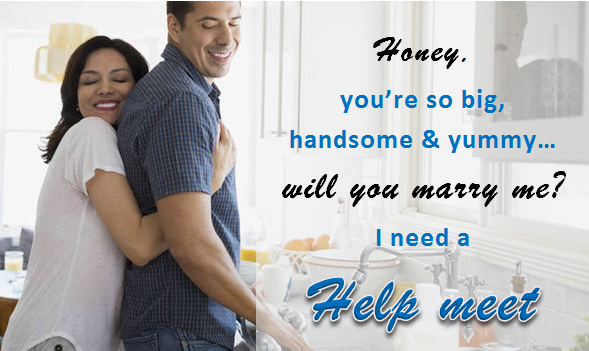 One morning while watching cable news, I observed a prominent female anchor conduct a “power segment” of sorts with other women who were accomplished and influential in their sphere of work.

With women breaking through glass ceilings more than ever before, in almost every job sector, a good bit of attention is being given to asking How they get it all done?  And is it possible to Have it all?  So the during this segment the host went around the table asking her distinguished guests, one-by-one, their take on the challenges of being a professional and raising a family.

That’s a fair question, and I’m always interested to hear what women have to say about that; but one of the answers was shocking and a bit peculiar. 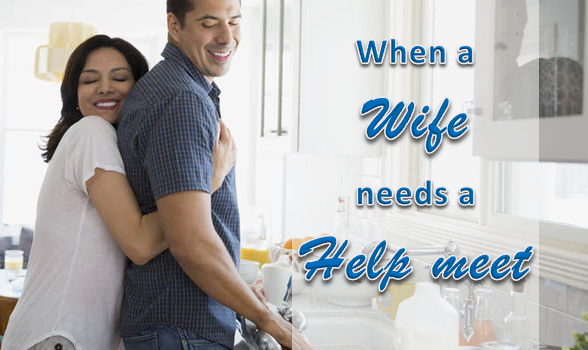 Her response elicited laughter around the table (I almost spit out my OJ!) and a bit of controversy about the use of the term “help meet.”  The distinguished panel seemed to understand what this Biblical term implied and the host took a slight bit of umbrage to it as she smiled and said, “That’s a topic for another show.”

It was obvious that this particular guest – no matter how successful she was – had a clear understanding of the biblical role of “help meet.”  She realized that her lifestyle and the demands of her career were not going to allow her to be a proper help meet to any husband.

What is your understanding of a help meet?

And the Lord God said, It is not good that the man should be alone; I will make him an help meet for him. (Genesis 2:18)

In the book of Genesis we see that God created Adam and then gave him his job assignment, but he was alone with NO suitable helper and that was not good.  So God caused Adam to fall into a deep sleep and took one of his ribs which He used to create Woman – a helper who would be suitable for him.  And, oh boy was it good!

So now a very good thing is happening! Adam has Eve – a companion who will love him and help him with his life’s work.  This was God’s intent and perfect will for woman – to compliment man and to be his helper.

When I first married, it took years for this truth to burrow its way deep down into my heart.  Like, I heard it…and I read it…but still, I didn’t understand it.  I didn’t know exactly what that truth meant regarding my marriage or what its practical application would look like in my marriage.

But if I didn’t understand it, how was I going to live it out?

It’s only when we know truth that we can surrender to it.

Still, once I understood its meaning, I wrestled with it.  Isn’t that just how life is (for some of us imperfect women)?

I soon learned that knowing truth is only half the battle.  Surrendering to truth is the other half!  🙂

Because I didn’t understand my primary assignment as a wife, every so often, my husband and I would come to an impasse on topics like where to live (especially when most of our friends were moving out of state), what kind of house to buy, and how to invest our money.

I used to wonder whose opinion should take precedence on these LIFE DEFINING topics.  It was clear that our interests were competing with one another, but only one person’s decision could triumph.

I understood enough Bible to know that on some level, I would ultimately have to yield to my husband’s will, but it was only after I put forth my case (which is fine), and then became angered or even bitter about things when they did not go my way (umm, not fine).

Losing “the battle” a couple of times caused me to resent the fact that I was even supposed to submit to my husband’s will.  I just thought it wasn’t fair!  I didn’t grow up in the church and my generation was heavily influenced by the woman’s movement.  I was taught that marriage was a 50/50 partnership (not 100/100 like I understand now) – just throw your ideas out there and may the best “man” win!

Knowing why I was designed made all the difference.

It honestly wasn’t until many years into my marriage that I began to learn about God’s design for a help meet.  The more I learned, the more I began to appreciate it.  Just knowing that I was created (as a wife) to be a helper to my husband alleviated so much of my inner struggle.  It was different than just being told to submit to my husband.

This knowledge began to change how I viewed my role as a wife – long before anything remotely related to submission could even enter the picture.  I began to look for ways to come alongside my husband and support him in his endeavors.  My “interests” would no longer compete with his or the work the Lord had given him or his vision for our family.  I would pray for God to lead him – and give my prayerful (and sometimes not so prayerful) input, and leave the outcomes with the Lord.

Sometimes. This. Is. Hard.  It’s honestly like taking a leap of faith.

No, I’m certainly not a poster child for “Help meet of the year.”  Sometimes my will asserts itself and I go Down. In. Flames. with a big foot in my mouth!  But God never gives up on me and keeps working on my imperfect self.  And my husband gives grace.  And I apologize to the kids (if I was loud and obnoxious in my dissent).  Yes, the struggle is REAL.

You know what I like about that guest? She was down right honest.

Holla Back!  What about you, wife?  Did you ever struggle with your role as Help meet?   Am I an unliberated 1950’s housewife?  Post a comment below or join the conversation on Facebook.

I shared this article at these amazing faith and family linkups.

« Why Every Wife Should Have Husband Envy (+ Video)
The Perfect Storm: A tale of light bulbs, lasagna and lessons learned »