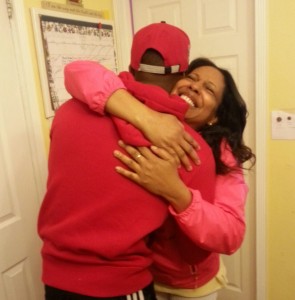 This week, I’m curled up in a fetal position, bawling and clothed in sackcloth and ashes.

Will you grab your Kleenex and join me in having a teenie-weenie pity party?  (If you do I’ll share my chocolate milkshake with you.)

My Marine pulled off today to head back to his military base, and these lyrics by Michael Jackson perfectly sums up how this momma is feeling…

(Yes, I have a flair for the dramatic..but I’m certain that most of us mom’s do.)

At first it was great – the grief thing – and I was really working it. He’d run behind me and hug and kiss me to let me know that I’m loved.  Then he grew tired of my “poor momma” routine and decided to no longer play along. (That sucked!)

Parenting young adults, especially ages 18 – 25, is particularly tricky.  It’s hard to know just how much to let go.  Yes, we all know that as parents we have to relinquish the reigns, but how much and how fast?  There isn’t a manual, you know.

I mean, he’s a man for goodness sake! But I feel like I changed his dirty, stinkin’ diapers just yesterday, and he needs me way more than he can possibly know – and it’s my job to remind him.

When he was here on vacation and he would head out of the door, I’d ask him where he was going. Hey, this is instinctive – I think it’s normal for a momma to know her son’s whereabouts – at least that’s where we left off right before he went into the military. 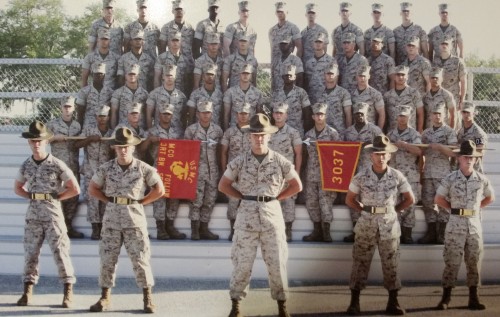 But when I’d ask, he’d give me the “Really Mom?” look and a vague answer – one that indirectly told me he didn’t want me to question his “moves” as he put it.  (What “moves” could this kid possibly have?!)

Of course, that was my cue to tell him that I was well within my rights as his mother to ask such things and that I virtually just finished breastfeeding him a few years ago, give or take a few.  OK, a lot of years ago!  Hey, it never hurts to be reminded.

Before he left I told him that I was concerned about him making the 10 hour drive back by himself, to which he responded by saying that he doesn’t’ need me to help plan his itinerary.  Ouch! Yes, that was a bit rough (the little booger!) – at least for my tastes – but in his defense I think he’s trying to figure out this stuff, too. Trying to figure out how to grow up and detach.

He’s giving me “Mom, I need space” cues and I’m getting his message – I am; but only after I trip all over it.

Now he’s somewhere driving across multiple states, ALONE, and not in the security of my home, walking around in his skivvies, saying “good morning” and “good night” mom, and my stomach is in knots and my internal organs are twisted like a pretzel.

Eventually, I let out a mommas cry.  You know the one, the “my son’s leaving again – woe is me” cry; but not in front of him, just on my husband’s shoulder.

I just finished cleaning his room and stripping his bed linen; bagging his trash and looking at his glove and soft ball from his youth. My husband came down stairs and found me in his room; he knew I’d be in there. 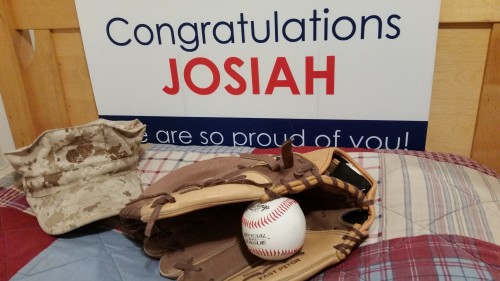 I know that when kids leave home some parents lock the door behind them and throw a party.  That’s a really cool thought and I suspect that one day I will lock-up, dead bolt the door, put their keys down the garbage disposal and throw a party, too; but I’m just not there yet.

Until then, I have sappy Micheal Jackson lyrics and food therapy to get me through.

(And because I know you’re sharing in my pain, you have liberty to indulge in a little food therapy, too!  But only for today.)

« The Church – A Place to Belong!
Leap of Faith: What if Following Your Husband Meant Losing Everything? »