♥  Do you check your phone every time you have a spare moment?

♥  Is your participation in your child’s events waning because of your need to capture the perfect picture?

♥  Are you guilty of missing a moment because you are trying to share it on social media?

If you’ve answered yes to any of these questions, chances are that you’re way too plugged in for your own good, and your kids want you to know something . . . 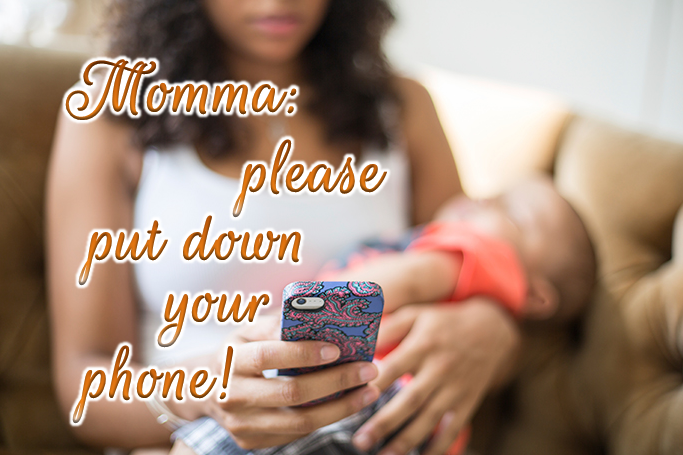 A Mother’s Day gift to have my hair done recently landed me at the salon where I noticed that in between women having their hair blown, curled, permed, colored and roller set, virtually everyone was preoccupied with their cell phone.

And while I, too, was on my phone, as I thought it was an opportune time to check emails and reply to some comments on my blog, it still intrigued me to see almost every woman present preoccupied with her phone, including the mom who was there with her infant daughter.

I mean, what an odd phenomenon, this staring into the phone thing.  If an alien from outer space came to Earth to observe human behavior, they may conclude that our phones are either an energy or food source!

As I sat there, I wondered (in the worst way) if my two oldest daughters will be overly preoccupied with their phones when their kids come along (one is newly married and the other on the verge of marriage).

I sincerely hope that when they become parents, that they will know better.  But I am fearful that they won’t.

When I had my four oldest kids, there were no cell phones to distract me or consume my attention.  That was 19 to 29 years ago.  But today, I routinely observe mother’s walking down the street or sitting in restaurants while talking on their phones (for extended periods of time) instead of engaging their kids. 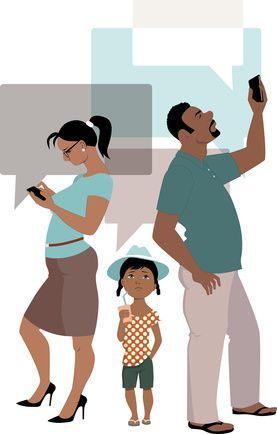 Being “plugged-in” has become a way of life, but what’s scary is that we norm it.

Confessions of a recovering phone addict . . . 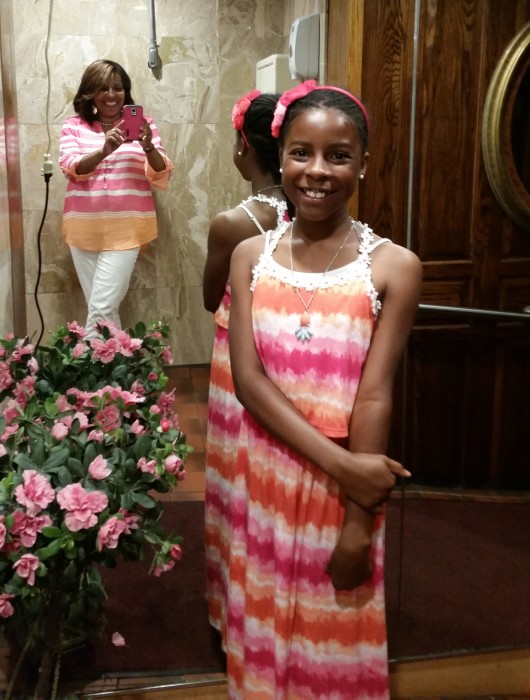 As a mommy blogger, especially one who enjoys family life, I used to take tons of photos to post to Facebook and Instagram, and to share here on my blog.  I didn’t do it because I wanted to give the impression that my family was better than anyone else’s, I did it with ministry in mind – I was trying to showcase how wonderful and amazing family life is; and whose family was better to exhibit  than my own, as my family was readily accessible!

My motives were pure and I was able to pull that “capture that moment” thing off for a while – but I had to stop because the following problems arose . . .

It’s been about a solid year or so since I stopped routinely snapping and posting.  I still enjoy looking at my friends’ Facebook and Instagram posts, but you will no longer find a well-documented account of my families’ life there (as was the case in previous years) because I am living in the moment and not missing it to snap photos.

At first, I felt like I was missing everything – not taking a ton of pics.  Then I asked myself why I ever thought that everything was meant to be captured in the first place.

You won’t believe this because I don’t look a day over 17 (that was your one good laugh for the day), but I wasn’t born in the digital age, and still, the baby and childhood pictures that I see of myself are more than enough.  I love looking at my baby album and childhood albums of occasional vacations and family reunions with the annual school picture thrown in – and that seems to be enough.  And then there were other significant milestones like my Sweet 16, as well as my high school and college life – the latter two which were snapped by me.  Why do I think that my kids need more than that?

Even more than a year later, I still sometimes feel overcome with the need to snap and share.  Sunday was my 19-year-old’s birthday, and as we sat at the breakfast table just before heading to church, I thought about how appropriate it would be to take a picture of her lovely breakfast spread to share on social media . . . but I didn’t.  I rode out the impulse and let the opportunity pass, and you know what: NONE OF MY CHILDREN COMPLAINED OR EVEN CARED.  We will always have the memory in my heart.

Not taking a picture for everything is becoming “normal” to me again.

Now that the photo demon has been tamed, I am constantly trying to get the beast of Facebook, messaging and email under control.  (I kicked Pinterest and Instagram to the curb some time ago and I never became a tweeter – though I feel a little birdie strongly calling my name.)  It seems to be a never ending war, but it’s one worthy of waging!

My four oldest children (ages 19, 21, 22, and 29) have an abundance of pictures in baby books, photo albums, and in decorative photo boxes.

BUT when it comes to my 9 and 11 year-old there are virtually no print pictures (comparatively speaking).  Over 90% of their photo life is digital: archived on my cell phone, Facebook, or even on this website (which I sometimes consider to be a virtual scrapbook.  Yikes!)  Some of their photos are even dying a slow death in my previous cell phone, which was put out to pasture when I upgraded.

So, I’m going out with a strong word of caution (and a funny video) to all of you momma’s with babies born in the digital age. Please print your pictures!  Don’t let this happen to you . . .

« It Really Is a Good Life
Summer Break, Baby! »